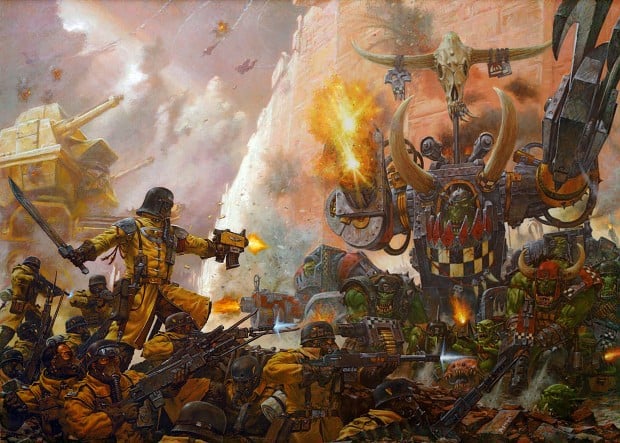 The Battle for Infernus Hive: A Narrative Event
Warhammer 40k
Narrative Event
2022-10-22
10:00:00
In this Mega battle, it's Orks Vs.'ERREYWUN ELZE!
YOU GONNA 'ELP DA BOYZ KRUSH SUM SKULLZ AN' JOIN DA WAAAGGGHH?!?
Or take this as a test of the God Emperor and hold the line while the civilians escape?
...Or will you drive the greenskins back for your own reasons?
[RECENT TRANSMISSION]
​Here is a full Event Packet, Please Read Prior to the Event​

Muster a 2000 points battleforged army. Maybe made of some units you may not normally take, HAVE FUN, and roll some dice while the story of Infernus Hive's victory, or destruction, unfolds
.
Make sure to bring some big stuff(Titanic/ SuperHeavy), as there will be the ability to add more shenanigans to the scrum. Just make sure you have rules and points costs for said behemoth war machines from a reputable source (GW compendium rules or stand in from another codex.) Not all large stuff will be used, but it helps to fill in gaps if there is a large discrepancy of people for one side.
Note that armies that are converted to look like another are welcome. For example, an armored company of imperial guard tanks that are sufficiently looted can play for the ork side with their rules, but using the basic Ork ballistic skill.
A packet will be released shortly, and updates posted as needed.
Remember, the main reason for this mega battle is SILLY FUN! Things may just get blown off the table, or survive despite an army's worth of firepower thrown at them. Just enjoy the story being told by what is happening on the battlefield!
Prologue:
"The years have been long. Reinforcements have not come in the space of Terran years. You fought off the Orks again and again. You beat them. You crushed them. You drove them back when they attempted to crack your gates, but still they persevered.
You had heard the stories about the multitudinous Orks: The Green Tide. You read the chapters of The Primer - twice even, but even you suspected - with your darkest of doubts - that the primer might be wrong.
It has been three Terran years, and it has been oddly quiet. There have been odd attacks: skirmishes along the roads, or stories of missing children, but your guard had been thorough. Every plot of land thought contaminated by the Xenos had been burned and salted. The world of Armageddon - while no paradise by any stretch - was ridding itself of at least one plague that faced it.
You were wrong, but take comfort in the knowledge that you were not the only one. The Imperial Prognosticators that guided the Imperial Army Commanders that dictated to the Imperial Brigade commanders that preached to the Imperial battalion commanders were also all wrong. They were all wrong.
As the looming effigies of the Ork gods rumble into view, you begin to realize the magnitude of the relative peace you once suffered."
20

This event does not have a description.

What can I win?

No prizes have been listed

Register for the event